A deeply affecting memoir, Still Life in Harlem is Eddy L. Harris's insightful look at a neighborhood - both real and metaphorical. He reveals the magic of Harlem, as it becomes home and spirit in his masterful hands. Through his keen perceptions we enter the images and passions Harlem has always conjured, coming to understand its significance to those who live there and to those who only yearn to come to it. Unforgettably moving, this book chronicles how the world we know as Harlem came to be - from its pastoral days as a New York suburb to its days as the mecca of the black universe to its decline into a symbol of urban despair. Harris is torn over what this community has become and remorseful for having abandoned it. Lured back by Harlem's enchanting whispers in the ear of his imaginings, he returns in reverie. With amazing emotional depth and candor, he explores issues of identity through Harlem's sturdy people - folks with eyes dimmed from too few chances and with life worries burdensome enough to bend backs. He also examines his taut relationship with his father, juxtaposing a generation that aspired to do everything in its power to ensure that their sons and daughters would enjoy a better life against a recent generation cornered by resignation and surrender. Through it all, in what can be seen as only a stretch toward grace, Harris discovers his need for Harlem and Harlem's need for him, locating the life in this rich community that still harbors the embers of hope. 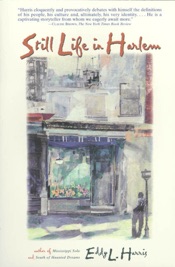