Sophie, a small town girl, is thrilled when she lands her dream internship with Wall Street firm Carey and Uhlmann. She's even more excited when she begins flirting with the handsome stranger who sits at the table across from her at the cafe she frequents for lunch.

Sophie doesn't know who he is, and after a steamy encounter in the cafe bathroom, she doesn't expect to ever see him again. But what happens when he finds her working alone in her office, late at night, and she discovers he's Alex Carey, the head of the company?

Sophie doesn't understand why she's so infatuated with this domineering man who orders her around, but when he tells her she should apply to be his personal assistant, she decides to do it. But when he tests her loyalty and submission to him during the interview, will it be too much for Sophie?

Sophie turned around slowly. She looked up cautiously into the man’s eyes. They were dark, revealing nothing. Sophie knew she should have been worried. This situation was what every mother warned their daughters about. But there was something about him. Something about the man’s proximity, standing only inches from Sophie. He seemed to strong, so powerful with only his presence. Something inside of Sophie tingled, she could feel her panties getting moist just standing this close to the stranger whose name she didn’t even know, to whom she’d never said a word. This is so unlike me, what am I doing? Suddenly, the man spoke. His voice was deep and low, matching his looks perfectly.

“Go stand by the sink. Hands on the edge, spread your legs.” He spoke softly, but his voice had an edge to it, a commanding edge, speaking the way one who is used to having their orders followed speaks. 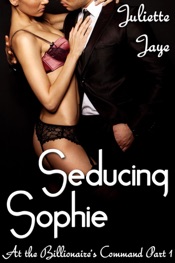