The history of President Peron’s conspiracy to protect Nazi war criminals: “a chilling, detailed story of one of Argentina’s most shameful secrets” (Foreign Affairs).

It has long been known that, after the Allied victory of World War II, Adolf Eichmann, Josef Mengele, Erich Priebke and many other Nazi war criminals found refuge in Argentina. In this book, Argentinian historian Uki Goni reveals the complex networks that made their escapes possible—and demonstrates that the operation was organized with the enthusiastic support of President Juan Peron. Even at this late date, when so much is known about the complicity of the Catholic Church and Allied intelligence agencies in the flight of the Nazis, Goni’s historical revelations are truly shocking.

This edition of The Real Odessa includes a revised introduction and conclusion, with a new afterword containing material that focuses on the Vatican’s complicity in providing sanctuary for war criminals. 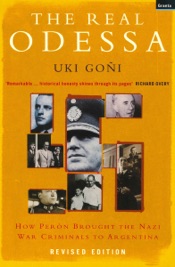