Harriet Tubman was known as the Moses of her people. She helped deliver hundreds of slaves out of bondage in the South to the freedom of the North. Each time Harriet went back into the South to rescue more of her people, she ran the risk of being caught herself. Later, she helped the Union forces as a spy, nurse, laundress, scout, and cook. When she led a group of men to attack Confederate forces, she became the first woman to lead an armed raid. Harriet Tubman's example of courage and determination continues to be an example to people all over the world. 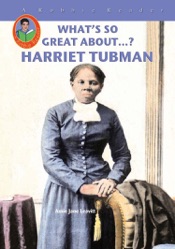