On 1 April 1982 Major Mike Norman, commander of Naval Party 8901, was looking forward to a peaceful yearlong tour of duty on the Falkland Islands. But events turned out differently, for the next day the Argentines invaded and he and his forty-three Royal Marines found themselves fighting for their lives.They took up defensive positions around Government House and on the approach to Stanley from Cape Pembroke to protect the Governor Rex Hunt and delay the advance to Stanley. They were prepared to die executing his orders. After a desperate battle in the gardens and even inside the house against superior numbers Rex Hunt ordered them to lay down their arms. As the surrender took place, an Argentine told a marine: The islands are ours now. The response was simple: We will be back. They were, and this is their story.The Royal Marines of Naval Party 8901 as well as some members of the previous detachment volunteered to join the Task Force and, some seventy-five days later, the men who witnessed the raising of the Argentine flag over the islands on 2 April saw the triumphant return of the Union Jack.Mike Normans dramatic account draws on his own vivid recollections, the log recording the defense of Government House, the testimony of the marines under his command and newly released files from government archives. It is a powerful and moving tribute to the marines who confronted the Argentines when they invaded and then fought to force them out. 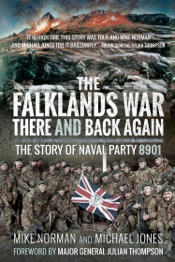