"History of the United States" is a monumental synthesis of American History subsequently produced by Charles A. Beard and his wife, Mary R. Beard. This book covers a period of more than 350 years, from the beginning of American Colonization to the establishment of The League of Nations in 1920.
Charles Austin Beard (1874-1948) was, with Frederick Jackson Turner, one of the most influential American historians of the first half of the 20th century. For a while he was a history professor at Columbia University but his influence came from hundreds of monographs, textbooks and interpretive studies in both history and political science. His works included a radical re-evaluation of the founding fathers of the United States, who he believed were motivated more by economics than by philosophical principles.
Mary Ritter Beard (1876-1958) was an American historian and archivist, who played an important role in the women's suffrage movement and was a lifelong advocate of social justice through educational and activist roles in both the labor and woman's rights movements.
Contents:
The Colonial Period
The Great Migration to America
The Development of Colonial Nationalism
Conflict and Independence
The New Course in British Imperial Policy
The American Revolution
Foundations of the Union and National Politics
The Formation of the Constitution
The Clash of Political Parties
The Jeffersonian Republicans in Power
The West and Jacksonian Democracy
The Farmers Beyond the Appalachians
The Middle Border and the Great West
Sectional Conflict and Reconstruction
The Civil War and Reconstruction
National Growth and World Politics
The Political and Economic Evolution of the South
Business Enterprise and the Republican Party
The Development of the Great West
America a World Power(1865-1900)
Progressive Democracy and the World War
The Spirit of Reform in America
The New Political Democracy
Industrial Democracy 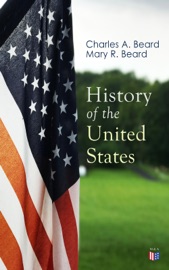