A Viking saga of warmongering, honour and loyalty from the Sunday Times bestselling author of Lancelot, Giles Kristian. Perfect for fans of Bernard Cornwell and Games of Thrones.

"This remains Viking writing at its best: thrilling in it truest sense, heart-rendering and, yes, glorious." -- MANDA SCOTT

"Probably the best Viking saga I have ever read -- ***** Reader review

"This trilogy is gripping from start to finish" -- ***** Reader review

Sigurd Haraldarson and his oathsworn band are winning fame and reputation. But to confront his hated enemy - the oath-breaker and betrayer King Gorm - they must win riches too.

When a daring raid goes wrong, Sigurd finds himself a prisoner of the powerful Jarl Guthrum. Bound like a slave, he is taken to the sacred temple at Ubsola to face the sacrificial knife.

But here Sigurd discovers a potent relic: Gungnir, a great spear that would give him the power to assemble a host strong enough to challenge King Gorm, and avenge the betrayal of his father and the murder of his family.
The roar of Odin and the wild hunt will be as nothing compared to Sigurd's rage, for he and his warriors will be borne on the wings of the storm . . .

Wings of the Storm concludes the Viking saga, started in God of Vengeance and Winter's Fire. 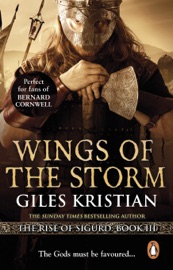